Skip to content
The Ninth Hour (2017) by Alice McDermott

“In one beautifully observed, quietly absorbing novel after another, Alice McDermott has made the insular world of New York’s Irish Catholic immigrants in the first half of the 20th century her own, much as Anne Tyler has laid claim to Baltimore’s middle class. And, like Tyler, in focusing tightly on a close-knit community of ordinary people, she leads us to a deeper understanding of the human condition.

The Ninth Hour, McDermott’s eighth novel, is about an order of nursing nuns and the needy families, elderly shut-ins, disabled invalids and strapped widows they care for in a predominantly Irish Catholic neighborhood of Brooklyn. Who cares about nuns? Read this book, and you will.” 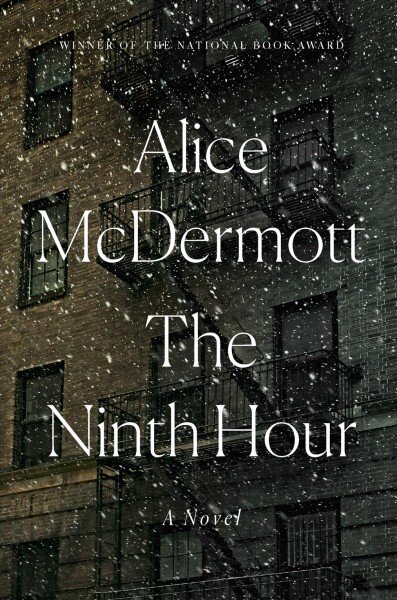 “February 3rd was a dark and dank day altogether: cold spitting rain in the morning and a low, steel-gray sky the rest of the afternoon.

“At four, Jim convinced his wife to go out to do her shopping before full darkness fell. He closed the door on her with a gentle wave. His hair was thinning and he was missing a canine on the right side, but he was nevertheless a handsome man who, at thirty-two, might still have passed for twenty. Heavy brows and deep-set, dark-lashed eyes that had been making women catch their breath since he was sixteen. Even if he had grown bald and toothless, as he seemed fated to do, the eyes would have served him long into old age.

“His overcoat was on the hall tree beside the door. He lifted it and rolled it lengthwise against his thighs. Then he fitted it over the threshold, tucking the cloth of the sleeves and the hem as well as he could into the space beneath the door. Theirs was a railroad flat: kitchen in the back, dining room, living room, bedroom in the front. He needed only to push the heavy couch a few feet farther along the wall to block his wife’s return. He stood on the seat to check that the glass transom above the door was tightly closed. Then he stepped down. He straightened the lace on the back of the couch and brushed away the shallow impression his foot had made on the horsehair cushion.

“In the kitchen, he pressed his cheek to the cold enamel of the stove and slid his hand into the tight space between it and the yellow wall. He groped a bit. They kept a baited mousetrap back there, or had in the past, and it made him careful. He found the rubber hose that connected the oven to the gas tap and pulled at it as vigorously as he could, given the confined space. There was a satisfying pop, and a hiss that quickly faded. He straightened up with the hose in his hand. The kitchen window looked into the gray courtyard where, on better days, there would be lines of clothes baking in the sun, although the floor of the deep courtyard, even in the prettiest weather, was a junkyard and a jungle. There were rats and bedsprings and broken crates. A tangle of city-bred vegetation: a sickly tree, black vines, a long-abandoned attempt at a garden.”

“The two nuns climbed the stairs again. Sister St. Saviour was aware of how patiently little Sister Jeanne paused with her on each step, a hand raised to offer aid. Inside, they coaxed the sobbing girl up off her knees and into the bed. It was Sister Jeanne who took over then—no weariness in her narrow shoulders, no indication at all that she felt the tedium of too much sympathy for a stranger. With Annie settled, Sister Jeanne told Sister St. Saviour to go back to the convent to rest. She whispered that she would keep vigil through the long night and have the lady ready first thing in the morning.

“‘Ready for what?’ Sister St. Saviour asked her, attempting to gauge how much the young nun understood—suspecting not much. ‘There will be no mass.’ Her pain, her bone-through fatigue, made her voice sharper than she knew.

Young Sister Jeanne looked up at the nun, moisture once more gathering in her pretty eyes. She said, with childish determination, ‘I’ll have her ready for whatever’s to come.’

“Sister St. Saviour left the two of them murmuring in the bedroom. At the casket, she paused again to look at the young man’s still face. She went to the window in the kitchen and looked down into that purgatory of the backyards. At this hour, there was nothing to be seen. All movement, all life, was in the lighted windows above: a man at a table, a child with a bedside lamp, a young woman walking an infant to and fro.

“Of course, it was Sister Jeanne who would be here when the baby arrived come summer.

“It was Sister Jeanne who had been sent for.”