Skip to content
Connect: Harnessing the Power of Words 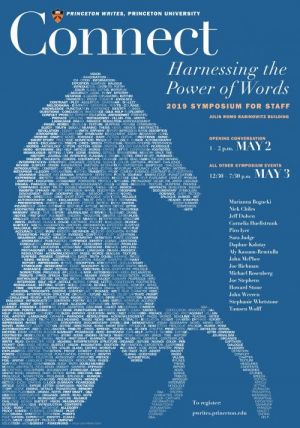 On May 2 and 3, 2019, Princeton Writes convened its first symposium on the written and spoken word, “Connect: Harnessing the Power of Words,” designed to strengthen staff communication skills and the human connections that sustain our campus. As Program Director John Weeren put it in his opening remarks, “the more we conceive of communication as relational rather than transactional and the more we subordinate the pronoun I and elevate the pronoun we, the more fruitful our exchanges will be.”

Led by some of our University community’s most accomplished writers and speakers, the symposium began on May 2 with an opening conversation between the distinguished essayist and novelist Pico Iyer and interim Vice Provost for International Affairs and Operations Aly Kassam-Remtulla, entitled “A World of Words: Communicating Outside Our Comfort Zones.”

The program for May 3 consisted of a master class, led by the Department of English’s Jeff Dolven (a second master class, led by Tamsen Wolff, will be rescheduled) and two panels, including the celebrated writer John McPhee, that addressed topics ranging from pitching ideas and building relationships to portraying the other and embracing creativity. The proceedings closed with a keynote address, “Embracing Our Humanity: ‘Extraordinary Stories of Ordinary Life,’” delivered by Joe Richman, founder and executive producer of Radio Diaries, whose work has won every major award in American broadcast journalism.

A full account of the symposium, chronicled by participants, has been posted by the Office of Communications here.  You can find another overview — by our own Cate Mahoney — here.