We owe a great deal 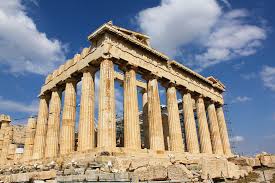 to Greece, and I’m not referring to moussaka, delicious though it is, or even to concepts of democratic governance, momentous though they are. I have something more fundamental in mind, for insofar as language underpins human society, the linguistic impact of Greek on English is far-reaching. The Greek alphabet influenced the Latin alphabet, which many countries use today, and thousands of English words in both general and specialized circulation derive from Greek, including “alphabet,” which, fittingly, embodies the first two letters of the Greek alphabet: “alpha” and “beta.”

Xenophon Zolotas, a onetime prime minister of Greece, famously addressed the International Bank for Reconstruction and Development primarily in words bequeathed to us by Greece. As he humorously noted, “I always wished to address this Assembly in Greek, but realized that it would have been indeed “Greek” to all present in this room. I found out, however, that I could make my address in Greek which would still be English to everybody.”

The result? Sentences like these: “We have the dynamism to program therapeutic practices as a prophylaxis from chaos and catastrophe. In parallel, a Panethnic unhypocritical economic synergy and harmonization in a democratic climate is basic. I apologize for my eccentric monologue.”

We can, of course, declare our fondness for or our aversion to something in other ways: “I adore technology” or “I’m afraid of heights,” but Greek gives us an alternative, as in “OIT is filled with technophiles” or “The Roof Shop is not a place for acrophobes.” Interestingly, both “techno” and “acro” are part of English’s Greek inheritance, and many other words ending with “phile” and “phobe” have prefixes derived from Greek. Here are just a few.

Bibliophile: one who loves books

Heliophile: one who loves the sun

Ailurophile: one who loves cats

Xenophobe: one who fears what is foreign

Agoraphobe: one who fears open or public spaces

Arachnophobe: one who fears spiders

English being English, any subject can be paired with “phile” and “phobe” without recourse to a Greek prefix. We could say, for example, that “To be a Francophile doesn’t mean one has to be a Germanophobe.” Or, to use two terms that are not in the Oxford English Dictionary, we could say, “They were staunch Obamaphiles in 2008 and 2012” or “I’m an exercisephobe . . . and proud of it!”

So, when you next think of Greece, dwell not only on the Parthenon and Aristotle but also on its gift of words. It may even be enough to make you a Hellenophile!