Skip to content
A Spooky Night with Princeton Writes

A Spooky Night with Princeton Writes

Maha Al Fahim ’19, Princeton Writes’ Undergraduate Fellow, spearheaded this year’s story slam, which brought together students and staff on the lawn of Forbes College for a night of Halloween-themed tales.  A scary time was had by all! 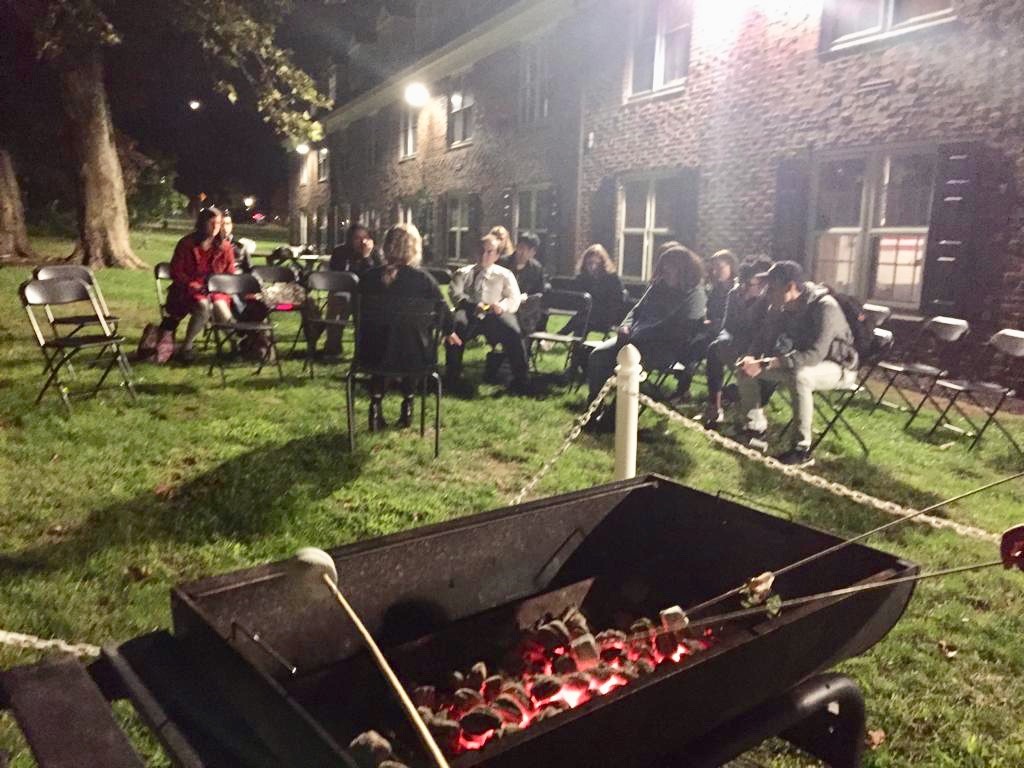 It is late autumn, and faint clouds hover before the moon. The night’s breeze brings a shiver to the trees. From among the branches, a leaf detaches, swirls in the air, and settles on the Forbes yard. Crunch. A student steps on the leaf as she’s heading to a Princeton Writes event: the Halloween Spooky Story Slam. Many students and staff are already gathered outside, roasting s’mores and sipping hot chocolate while they share scary stories.

Halloween, or All Hallows Eve, originated with the Celts, who lived two thousand years ago in what is present-day Ireland, the United Kingdom, and northern France. More specifically, it dates back to the Celtic festival of Samhain, meaning “summer’s end,” which marked the end of the harvest season and the start of winter, a cold, dark time associated with decay and death. Occurring at the end of the Celtic New Year, what we now know as Halloween was also believed to be a liminal time, when the barrier between this world and the otherworld thinned. Spirits and fairies could pass through more easily and roam actively on earth. Some mortals were afraid of walking in the dark during this time. So they dressed up as these spirits, hoping the ghosts would mistake them for fellow spirits and not possess them. Food was also left on the doorsteps to placate roaming spirits and prevent them from entering. Others kept their house doors open and saved a seat at the dinner table for the souls of their loved ones to return home for a night – an idea found in many cultures. And they lit candles to help these loved ones find their way back to the spirit realm.

Today, in the developed world at least, the onset of winter is no longer associated with famine but rather with holiday feasts. We no longer fear spirits out to possess us. Yet, we continue the Halloween traditions of bonfires, trick-or-treating, telling ghost stories, and dressing up. As though to make up for the fact we no longer truly fear these spirits, we have tried to make them even more frightening. While Halloween has lost some of its superstitious or religious overtones, we have tried to preserve the element of fear. Intentionally now, we seek to scare ourselves.

Sitting with a skewer of gooey roasted marshmallows in hand, enthralled by an attendee’s story, I wondered why it feels so good to be frightened so badly. Perhaps such morbid stories allow us to dance the liminal line between life and death, to gaze at our own mortality. It gives us a rush of adrenaline, without the real danger, making us feel alive.

At the story slam, a range of stories exploring the theme of fear was shared. Some attendees told folktales and fiction stories – of a couple in an Arabian desert encountering the tricks of gins, or a man meeting a ghost girl at a hotel. Others shared episodes from real life that made their hearts, and ours, race – from a first trick-or-treating journey to a frightening roller coaster ride. Others shared their personal experiences with the supernatural world – seeing a vision of a colleague’s murder the day before it happened or seeing a ghost woman face to face.

These stories themselves shook us and took us on a roller coaster ride. We screamed, laughed, and gasped. Our hearts raced, and our breath caught. And even once the ride was over, the storytellers’ words rang in our ears. Walking home, the attendees’ footsteps were a little lighter. It was as though they were surveying the bushes nearby, wary of what might lurk in the shadows or just around the corner …