On Roland Barthes and Writing Letters to Our Beloveds

Most letters aren’t worth reading more than once or twice, but love letters invite us to read and reread not just the text but ourselves and others. There is, of course, more to any letter than meets the eye, as many a writer has attested:

“A Letter always feels to me like immortality because it is the mind alone without corporeal friend. Indebted in our talk to attitude and accent, there seems a spectral power in thought that walks alone.” – Emily Dickinson, letter #330

“I might be crying now, if I weren’t writing letters.” – Henry James, The Wings of the Dove

But Roland Barthes, the great twentieth-century French literary theorist and critic, makes “Letter” a keyword in A Lover’s Discourse, a book that deconstructs the interior language of love. Love letters are different, he would argue, from letters written to friends and family. 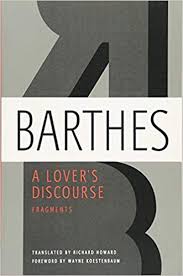 gins his entry with the idea that writing a love letter has less to do with the writer than with the object of the letter. Writing to one’s beloved is a way to physically impress upon this object that one is thinking of her or him and that the moment—which is actually a series of moments—has been solidified and can be held.

Barthes is firm, however, on making the distinction between “thinking of you” and the more direct “thinking you.” The writer can only think of the beloved in a hypnotic metonymy, “forgetting you and frequently waking up out of that forgetfulness. Many things, by association, bring you back into my discourse.” The power relation that’s established here is a surprising one, because at first we have the writer saying that the beloved does not consume her or his thoughts; that the writer frequently forgets and must therefore reimagine the beloved. But then comes the realization that the constant reoccurrence of the beloved is somehow more powerful than consistency itself: that a vision flitting away and returning holds more consequence than being blinded by an image. It’s as if the writer were unable to adjust to her or his image of or desire for the beloved, so there’s an exhausting, exhilarating, relentless awakening.

This stuttering motion Barthes calls a “rhythm of thought: I have nothing to tell you, save that it is to you that I tell this nothing.” (This might apply to texting, but Barthes might roll over in his grave at the thought.)

Barthes defines “correspondence” as different from love letter writing. Correspondence is strategic; writing to the beloved is messy. Barthes gives us an example from the Marquise de Merteuil, who argued that the purpose of a love letter has nothing to do with writing the self but, rather, writing the future reader into the letter—knowing what this individual wants to hear and creating this individual’s image within the text; filling the water of the pond Narcissus gazed in, so to speak.

There is no apparent goal, just expression—but of what? Of the writer’s desperate want? Of the beloved into which this want is poured? Perhaps not even that: It is sufficient that a love letter establish a relation between two images.

And so the writer loves, which is to say, the lover writes. In doing so, she or he “enjoins the other to reply, for without a reply the other’s image changes, becomes other.” The writer craves fixity in the beloved, and the love letter is a testament to this desire and the mutability that thwarts and feeds it.

It’s probably just as well that most of our letters take the form of mundane emails, but when amor does intervene, it’s good to know that Barthes has done the heavy thinking for us.