The hardest emails to write are those involving no — no to an idea, no to an opportunity, no to a request, no to an invitation. Unless one is an unreformed Ebenezer Scrooge, negatives do not come easily. As The New York Times put it in an article on the art of saying no, “Humans are social animals who thrive on reciprocity. It’s in our nature to be socially obliging, and the word no feels like a confrontation that threatens a potential bond.” 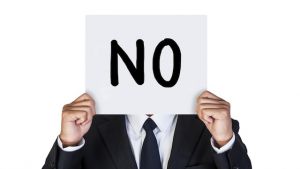 This is especially true in an environment such as Princeton’s, which places a premium on collegiality and going the extra mile. The lyrics of “Old Nassau” invite us to act “with one accord,” and saying no can feel decidedly discordant. But there are times when acquiescing can be injurious, be it to oneself, the asker, or Princeton itself. Hosting a graduation party on the roof of Blair Tower might make one a popular director of student life, but the perils of such a venture far outweigh whatever arguments could be mustered in its favor.

The challenge of saying no is both simplified and complicated when the medium is email, thanks to its impersonality. There is no need to face the hopeful gaze of a valued colleague, but neither can we soften our declination with a rueful smile. When the stakes are high, a conversation, followed, if necessary, by an email, is generally best, but when a written answer will suffice, how can we respond in a way that brings maximum comfort to ourselves and the asker? Some disappointment is unavoidable, but we can make our no more palatable in the following ways.

(1) Unless you are being asked to condone unethical or illegal behavior, validate the impulse behind the ask, as in “While I value the work of your committee and applaud this new initiative, I’m afraid . . .”

(2) Briefly but substantively explain why your no is necessary, as in “Since our funds are finite and have been fully utilized in each of the past five years, a larger allocation could only be made at the expense of other students, and so, to be fair, I must . . .”

(3) If possible, base your response on universally applicable norms or policies, including your own, lest your no be regarded as a personal rejection, as in “It is my longstanding practice to only write letters of recommendation for those who report directly to me . . .”

(4) Consider how your no could benefit the asker, as in “Holding your event in June rather than May would significantly increase the number of venues available to you . . .”

(5) Suggest realistic alternatives, as in “Based on conversations with colleagues at the McGraw Center for Teaching and Learning, I would encourage you to seek assistance there . . .”

(6) Demonstrate good will, as in “Although my department is not in a position to co-sponsor your conference, we would be happy to help you publicize it . . .”

(7) If at all fruitful, maintain an open door, as in “I would welcome a revised proposal that takes my concerns and those of other stakeholders into account . . .”

(8) Without introducing ambiguity, present your no as gently as possible, as in “Unfortunately, much though I would like to join you, I regret that it will not be possible for me to do so this year . . .”

Despite our reluctance to invoke it, no has a constructive role to play in our daily lives.  It can, in fact, be kinder than yes, especially when kindly conveyed.