Skip to content
Book of the Month: Bel Canto by Ann Patchett (2008) 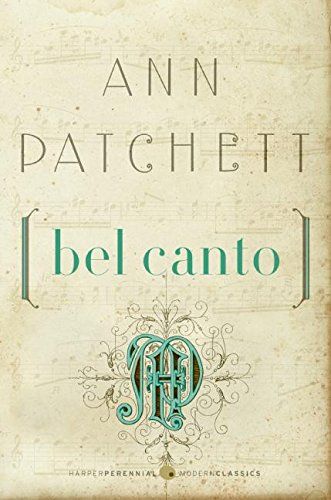 “One of the delightful things about the way ”Bel Canto” unfolds is the way Ann Patchett uses the ordeal of entrapment to locate unexpected resources in her characters, like Roxane’s new leadership potential. Another surprising quality to emerge, in a book that works both as a paean to art and beauty and a subtly sly comedy of manners, is the flair that the host shows for running the household, once he realizes that being taken hostage has ruined his political career. ”With a dish towel knotted around his waist, he took on the qualities of a charming hotel concierge. He would ask, ‘Would you like some tea?’ He would ask, ‘Would it be too much of an imposition to vacuum beneath the chair in which you were sitting?’ Everyone was very fond of Ruben. Everyone had completely forgotten that he was the vice president of the country.”

As the book moves along and a new, impromptu civilization is born beneath the vice president’s roof, Ms. Patchett, whose earlier books include ”The Patron Saint of Liars” and ”The Magician’s Assistant,” lets her characters’ new lives bloom like flowers. The quality of enchantment even goes so far as to let one of the soldiers, after all the female hostages except Roxane have been freed, turn out to be a beautiful young woman named Carmen. Fair enough, a book with opera in its soul needs a Carmen, even if this one has never heard such singing before. And even if she is here mostly to fall in love with the Japanese translator during 2 a.m. language lessons in the china closet. Although this novel is entirely housebound, at the vice presidential mansion, Ms. Patchett works wonders to avoid any sense of claustrophobia and keeps the place fresh at every turn.”

Maslin, Janet, “BOOKS OF THE TIMES; Uninvited Guests Wearing You Down? Listen to Opera” The New York Times, May 31, 2001

“When the lights went off the accompanist kissed her. Maybe he had been turning towards her just before it was completely dark, maybe he was lifting his hands. There must have been some movement, a gesture, because every person in the living room would later remember a kiss. They did not see a kiss, that would have been impossible. The darkness that came on them was startling and complete. Not only was everyone there certain of a kiss, they claimed they could identify the type of kiss: it was strong and passionate, and it took her by surprise. They were all looking right at her when the lights went out. They were still applauding, each on his or her feet, still in the fullest throes of hands slapping together, elbows up. Not one person had come anywhere close to tiring. The Italians and the French were yelling, “Brava! Brava!” and the Japanese turned away from them. Would he have kissed her like that had the room been lit? Was his mind so full of her that in the very instant of darkness he reached for her, did he think so quickly? Or was it that they wanted her too, all of the men and women in the room, and so they imagined it collectively. They were so taken by the beauty of her voice that they wanted to cover her mouth with their mouth, drink in. Maybe music could be transferred, devoured, owned. What would it mean to kiss the lips that had held such a sound?.”

“No one was frightened of the darkness. They barely noticed. They kept applauding. The people who lived in other countries assumed that things like this must happen here all the time. Lights go on, go off. People from the host country knew it to be true. Besides, the timing of the electrical failure seemed dramatic and perfectly correct, as if the lights had said, You have no need for sight. Listen. What no one stopped to think about was why the candles on every table went out as well, perhaps at that very moment or the moment before. The room was filled with the pleasant smell of candles just snuffed, a smoke that was sweet and wholly unthreatening. A smell that meant it was late now, time to go to bed.”