Skip to content
Book of the Month: I Am Not Your Perfect Mexican Daughter (2017)

Book of the Month: I Am Not Your Perfect Mexican Daughter (2017)

“Erika L. Sánchez’s blistering book, I Am Not Your Perfect Mexican Daughter, lays out a real and raw world, one with some gems and some monsters, and with everyone in the middle just trying to figure out how to live.

There’s a lot of strong content here that some readers may find disturbing. Sánchez is blunt about drug use, strong language, sexual content, depression/anxiety, violence, abuse, and suicide.

Julia’s many struggles are those of a hibiscus fighting to blossom in a garbage heap. This is a girl who feels everything deeply. She fights with all of her heart to make it out of her circumstances, but some days she feels like the heap will bury her alive.

‘I want to go to school. I want to see the world,’ she cries. ‘I want so many things sometimes I can’t even stand it. I feel like I’m going to explode.’

Julia’s persona rockets off the page and into your face from the get-go. The blend of harsh, practical, ambitious, and lonely leaves behind an emotional wake like an oil spill. Julia’s heart is streaked with grime and yet iridescent.”

Ward Beim-Esche, Katie, ‘I Am Not Your Perfect Mexican Daughter’ lays out a real and raw world, The Christian Science Monitor, December 29, 2017. 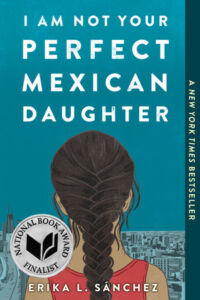 “What’s surprised me most about seeing my sister dead is the lingering smirk on her face. Her pale lips are turned up ever so slightly, and someone has filled in her patchy eyebrows with a black pencil. The top half of her face is angry–like she’s ready to stab someone–and the bottom half is almost smug. This is not the Olga I knew. Olga was as meek and fragile as a baby bird.

I wanted her to wear the pretty purple dress that didn’t hide her body like all of her other outfits, but Amá chose the bright yellow one with the pink flowers I’ve always hated. It was so unstylish, so classically Olga. It made her either four or eighty years old. I could never decide which. Her hair is just as bad as the dress–tight, crunchy curls that remind me of a rich lady’s poodle. How cruel to let her look like that. The bruises and gashes on her cheeks are masked with thick coats of cheap foundation, making her face haggard, even though she is (was) only twenty-two. Don’t they pump your body full of strange chemicals to prevent your skin from stretching and puckering, to keep your face from resembling a rubber mask? Where did they find this mortician, the flea market?”

“I want to hug Amá and tell her it’s going to be okay, even though it’s not and never will be, but I feel almost paralyzed, like I’m underwater and made of lead. When I open my mouth, nothing comes out. Besides, Amá and I haven’t had that kind of relationship since I was little. We don’t hug and say, “I love you,” like on TV shows about boring white families who live in two-story houses and talk about their feelings. She and Olga were practically best friends, and I was the odd daughter out. We’ve been bickering, drifting away from each other for years. I’ve spent so much of my life trying to avoid Amá because we always end up arguing over stupid, petty things. We once fought about an egg yolk, for instance. True story.”