Skip to content
Book of the Month: I Feel Bad About My Neck: And Other Thoughts on Being a Woman by Nora Ephron(2006)

Book of the Month: I Feel Bad About My Neck: And Other Thoughts on Being a Woman by Nora Ephron (2006)

“The fact that she is 65 gives Ms. Ephron unavoidable subjects for contemplation: age, loss and vanity. None are automatically delightful. But she retains an uncanny ability to sound like your best friend, whoever you are, even when she is describing the death of her own best friend in a sobering piece called “Considering the Alternative.” When, in the end, she has no better way to ward off mortality than staying silky smooth by using the right bath oil, a certain guilty, pampered segment of the reading public will know exactly what she means.

“If anyone young is reading this, go, right this minute, put on a bikini and don’t take it off until you’re 34,” she instructs in the confiding, busybody tone that comes so entertainingly to her. At 34, continue for nine more years to show off, and then it’s over. In the title essay Ms. Ephron advises her reader to start hiding that neck at the age of 43 and notes that her own friends often dress like “a white ladies’ version of the Joy Luck Club.” As she explains it: “Our faces are lies and our necks are the truth. You have to cut open a redwood tree to see how old it is, but you wouldn’t if it had a neck.” 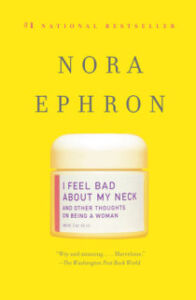 “What I Wish I’d Known

People have only one way to be.

Never marry a man you wouldn’t want to be divorced from.

Don’t cover a couch with anything that isn’t more or less beige.

Don’t buy anything that is 100 percent wool even if it seems to be very soft and not particularly itchy when you try it on in the store.

You can’t be friends with people who call after 11 p.m.

Block everyone on your instant mail.

The world’s greatest babysitter burns out after two and a half years.

The last four years of psychoanalysis are a waste of money.

The plane is not going to crash.

At the age of fifty-five you will get a saggy roll just above your waist even if you are painfully thin.

This saggy roll just above your waist will be especially visible from the back and will force you to reevaluate half the clothes in your closet, especially the white shirts.”

The empty nest is underrated.

You can order more than one dessert.

You can’t own too many black turtleneck sweaters.

If the shoe doesn’t fit in the shoe store, it’s never going to fit.

When your children are teenagers, it’s important to have a dog so that someone in the house is happy to see you.

Back up your files.

Whenever someone says the words “Our friendship is more important than this,” watch out, because it almost never is.

There’s no point in making piecrust from scratch.

The reason you’re waking up in the middle of the night is the second glass of wine.

The minute you decide to get divorced, go see a lawyer and file the papers.

If only one third of your clothes are mistakes, you’re ahead of the game.

If friends ask you to be their child’s guardian in case they die in a plane crash, you can say no.

There are no secrets.”