Skip to content
Book of the Month: The Book of Goose (2022) by Yiyun Li

“All fiction is a kind of hoax in that it spins a delusion, inciting genuine feelings with invented characters and situations. The most propulsively entertaining of Li’s novels, “The Book of Goose” is an existential fable that illuminates the tangle of motives behind our writing of stories: to apprehend and avenge the truth of our own being, to make people know what it feels like to be us, to memorialize the people we keep alive in the provincial villages of our hearts. But it’s the motives behind our impulse to read fiction, and why we enter this delusion so eagerly, that occupied me through Li’s novel: the desire to suspend life in order to return to it more specifically and more vividly known to ourselves — and perhaps in order to believe, despite all evidence to the contrary, in our own consequence.”

You can slash a book. There are different ways to measure depth, but not many readers measure a book’s depth with a knife, making a cut from the first page all the way down to the last. Why not, I wonder.

“You can hand the knife to another person, betting with yourself how deep a wound he or she is willing to inflict. You can be the inflicter of the wound.

“One half orange plus another half orange do not make a full orange again. And that is where my story begins. An orange that did not think itself good enough for a knife, and an orange that never dreamed of turning itself into a knife. Cut and be cut, neither interested me back then.

“My name is Agnes, but that is not important. You can go into an orchard with a list of names and write them on the oranges, Françoise and Pierre and Diane and Louis, but what difference does it make? What matters to an orange is its orange-ness. The same with me. My name could have been Clémentine, or Odette, or Henrietta, but so? An orange is just an orange, as a doll is a doll. Don’t think that once you name a doll, it is different from other dolls. You can bathe it and clothe it and feed it empty air and put it to bed with the lullabies you imagine a mother should be singing to a baby. All the same, the doll, like all dolls, cannot even be called dead, as it was never alive.

“The name you should pay attention to in this story is Fabienne. Fabienne is not an orange or a knife or a singer of lullabies, but she can make herself into any one of those things. Well, she once could. She is dead now. The news of her death arrived in a letter from my mother, the last of my family still living in Saint Rémy, though my mother was not writing particularly to report the death, but the birth of her own first great-grandchild. Had I remained near her, she would have questioned why I have not given birth to a baby to be added to her collection of grandchildren. This is one good thing about living in America. I am too far away to be her concern. But long before my marriage I stopped being her concern—my fame took care of that.

“America and fame: they are equally useful if you want freedom from your mother.” 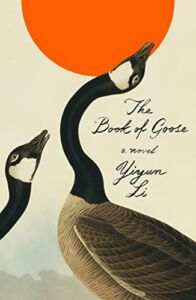 “‘You can grow anything. Just like potatoes,’ Fabienne said.

“I thought she would have given a better answer. Growing happiness on the top of a maypole, or in a wren’s nest, or between two rocks in a creek. Happiness should not be dirt-colored and hidden underground. Even apples on a branch would be better suited to be called happiness than apples in the earth. Though if happiness were like apples, I thought, it would be quite ordinary and uninteresting.

“‘You don’t believe me?’ Fabienne said. ‘I have an idea. We grow your happiness as beet and mine as potato. If one crop fails, we still have the other. We won’t be starved.’ ”

“Such were the conversations we often had then, nonsense to the world, but the world, we already knew, was full of nonsense. We might as well amuse ourselves with our own nonsense. If the thumb on the left hand got crushed under a hammer, would the thumb on the right feel anything? Why did god never think of giving people ear-lids, so we could close our ears as we shut our eyes at bedtime, or anytime when we were not in the mood for the chattering of the world? If the two of us prayed with equal seriousness but with the opposite requests—dear god, please let tomorrow be a sunny day; dear god, please let tomorrow be an overcast day—how did he decide which prayer he should honor?”