Skip to content
Book of the Month: War and Peace by Leo Tolstoy (1865)

“1 People change. The characters in War and Peace endure extreme experiences, and emerge at the end as quite different people. The miracle of the book is that the Natasha who falls in love with anyone and everyone in the ballrooms of the opening is recognisably the same woman who withdraws from society at the end.

2 There is no hero and no heroine. This is the story of a group of people living within a society. Andrei Bolkonsky is not Tolstoy’s hero, and Natasha is not a romantic heroine. It forgives ideas of heroism, most beautifully in the last words any character speaks in the book, as Andrei’s son thinks of his father at the end of the First Epilogue. It understands and sympathises with those ideas but it excuses itself from repeating them. The book will try to understand why people behave as they do, and it may make the best case possible for some strange actions, but it won’t make apologies for anyone and won’t pass a final judgment. Don’t expect to be able to predict what happens. Even the characters won’t be able to explain why they do what they do, perhaps until weeks or months later. The subject of the book is the wildness of possibility, and how the world can be changed by one woman saying, for no particular reason that she can explain, ‘I have had so little happiness in my life.'” 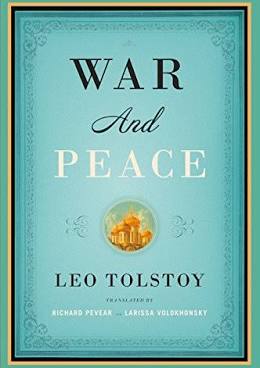 “Well Prince, Genoa and Lucca are now no more than private estates of the Bonaparte family. No, I warn you, that if you do not tell me we are at war, if you again allow yourself to palliate all the infamies and atrocities of this Antichrist (upon my word, I believe he is), I don’t know you in future, you are no longer my friend, no longer my faithful slave, as you say. There, how do you do, how do you do? I see I’m scaring you, sit down and talk to me.”
These words were uttered in July 1805 by Anna Pavlovna Scherer, a distinguished lady of the court, and confidential maid-of-honour to the Empress Marya Fyodorovna. It was her greeting to Prince Vassily, a man high in rank and office, who was the first to arrive at her soirée. Anna Pavlovna had been coughing for the last few days; she had an attack of la grippe, as she said—grippe was then a new word only used by a few people. In the notes she had sent round in the morning by a footman in red livery, she had written to all indiscriminately:
“If you have nothing better to do, count (or prince), and if the prospect of spending an evening with a poor invalid is not too alarming to you, I shall be charmed to see you at my house between 7 and 10. Annette Scherer.”
“Heavens! what a violent outburst!” the prince responded, not in the least disconcerted at such a reception. He was wearing an embroidered court uniform, stockings and slippers, and had stars on his breast, and a bright smile on his flat face.
He spoke in that elaborately choice French, in which our forefathers not only spoke but thought, and with those slow, patronising intonations peculiar to a man of importance who has grown old in court society. He went up to Anna Pavlovna, kissed her hand, presenting her with a view of his perfumed, shining bald head, and complacently settled himself on the sofa.
“First of all, tell me how you are, dear friend. Relieve a friend’s anxiety,” he said, with no change of his voice and tone, in which indifference, and even irony, was perceptible through the veil of courtesy and sympathy.
“How can one be well when one is in moral suffering? How can one help being worried in these times, if one has any feeling?” said Anna Pavlovna. “You’ll spend the whole evening with me, I hope?”

At eight o’clock Kutuzov rode to Pratz at the head of Miloradovich’s fourth column, the one which was to take the place of the columns of Przebyszewski and Langeron, which had already gone down. He greeted the men of the head regiment and gave the order to move, thus showing that he intended to lead the column himself. Having ridden to the village of Pratz, he halted. Prince Andrei, one of the enormous number of persons constituting the commander in chief’s suite, stood behind him. Prince Andrei felt excited, irritated, and at the same time restrainedly calm, as a man usually is when a long-desired moment comes. He was firmly convinced that this was the day of his Toulon or his bridge of Arcole.[1] How it would happen, he did not know, but he was firmly convinced that it would be so. The locality and position of our troops were known to him, as far as they could be known to anyone in our army. His own strategic plan, which there obviously could be no thought of carrying out now, was forgotten. Now, entering into Weyrother’s plan, Prince Andrei pondered the possible happenstances and came up with new considerations, such as might call for his swiftness of reflection and decisiveness.”