Skip to content
Book of the Month: Parable of the Sower by Octavia Butler (1993)

Book of the Month: Parable of the Sower by Octavia Butler (1993)

“By writing black female protagonists into science fiction, and bringing her acute appraisal of real-world power structures to bear on the imaginary worlds she created, Butler became an early pillar of the subgenre and aesthetic known as Afrofuturism. (Kara Walker cites her as an inspiration; and, as Hilton Als has pointed out, Butler is the ‘dominant artistic force’ in Beyoncé’s visual album ‘Lemonade.’) In the ongoing contest over which dystopian classic is most applicable to our time, Kellyanne Conway made a strong case for George Orwell’s ‘Nineteen Eighty-Four’ when she used the phrase ‘alternative facts’ and sent the novel to the top of Amazon’s best-seller list. Margaret Atwood’s ‘The Handmaid’s Tale’ also experienced a resurgence in sales, and its TV adaptation on Hulu inspired protest costumes. But for sheer peculiar prescience, Butler’s novel and its sequel may be unmatched.”

“I’m learning to fly, to levitate myself. No one is teaching me. I’m just learning on my own, little by little, dream lesson by dream lesson. Not a very subtle image, but a persistent one. I’ve had many lessons, and I’m better at flying than I used to be. I trust my ability more now, but I’m still afraid. I can’t quite control my directions yet.

“I lean forward toward the doorway. It’s a doorway like the one between my room and the hall. It seems to be a long way from me, but I lean toward it. Holding my body stiff and tense, I let go of whatever I’m grasping, whatever has kept me from rising or falling so far. And I lean into the air, straining upward, not moving upward, but not quite falling down either. Then I do begin to move, as though to slide on the air drifting a few feet above the floor, caught between terror and joy.” 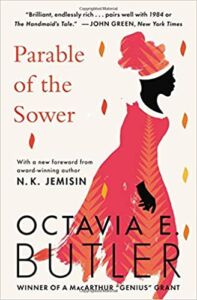 “By the time we reached the fortress-church, my jaw-muscles hurt from clinching and unclinching my teeth, and overall, I was exhausted.
“There were only five or six dozen people at the service—enough to fill up our front rooms at home and look like a big crowd. At the church, though, with its surrounding wall and its security bars and Lazor wire and its huge hollowness inside, and its armed guards, the crowd seemed a tiny scattering of people. That was all right. The last thing I wanted was a big audience to maybe trip me up with pain.
“The baptism went just as planned. They sent us kids off to the bathrooms (‘men’s,’ ‘women’s,’ ‘please do not put paper of any kind into toilets,’ ‘water for washing in bucket at left. . . .’) to undress and put on white gowns. When we were ready, Curtis’s father took us to an anteroom where we could hear the preaching—from the first chapter of Saint John and the second chapter of The Acts—and wait our turns.
“My turn came last. I assume that was my father’s idea. First the neighbor kids, then my brothers, then me. For reasons that don’t make a lot of sense to me, Dad thinks I need more humility. I think my particular biological humility—or humiliation—is more than enough.
“What the hell? Someone had to be last. I just wish I could have been courageous enough to skip the thing altogether.
“So, ‘In the name of the Father, the Son, and the Holy Ghost. . . .’
“Catholics get this stuff over with when they’re babies. I wish Baptists did. I almost wish I could believe it was important the way a lot of people seem to, the way my father seems to. Failing that, I wish I didn’t care.
“But I do. The idea of God is much on my mind these days. I’ve been paying attention to what other people believe—whether they believe, and if so what kind of God they believe in. Keith says God is just the adults’ way of trying to scare you into doing what they want. He doesn’t say that around Dad, but he says it. He believes in what he sees, and no matter what’s in front of him, he doesn’t see much. I suppose Dad would say that about me if he knew what I believe. Maybe he’d be right. But it wouldn’t stop me from seeing what I see.
“A lot of people seem to believe in a big-daddy-God or a big- cop-God or a big-king-God. They believe in a kind of super-person. A few believe God is another word for nature. And nature turns out to mean just about anything they happen not to understand or feel in control of.
“Some say God is a spirit, a force, an ultimate reality. Ask seven people what all of that means and you’ll get seven different answers. So what is God? Just another name for whatever makes you feel special and protected?”
admin2021-01-28T19:21:18-05:00
Toggle Sliding Bar Area