Skip to content
Book of the Month: Song of Solomon by Toni Morrison (1977)

Book of the Month: Song of Solomon by Toni Morrison (1977)

“Toni Morrison’s first two books — “The Bluest Eye” with the purity of its terrors and “Sula” with its dense poetry and the depth of its probing into a small circle of lives — were strong novels. Yet, firm as they both were in achievement and promise, they didn’t fully forecast her new book, “Song of Solomon.” Here the depths of the younger work are still evident, but now they thrust outward, into wider fields, for longer intervals, encompassing many more lives. The result is a long prose tale that surveys nearly a century of American history as it impinges upon a single family. In short, this is a full novel — rich, slow enough to impress itself upon us like a love affair or a sickness — not the two-hour penny dreadful which is again in vogue nor one of the airless cat’s cradles custom-woven for the delight and job-assistance of graduate students of all ages.” 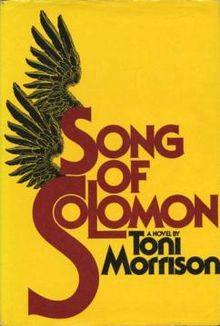 “The North Carolina Mutual Life Insurance agent promised to fly from Mercy to the other side of Lake Superior at three o’clock. Two days before the event was to take place he tacked a note on the door of his little yellow house:

“Mr. Smith didn’t draw as big a crowd as Lindbergh had four years earlier–not more than forty or fifty people showed up–because it was already eleven o’clock in the morning, on the very Wednesday he had chosen for his flight, before anybody read the note. At that time of day, during the middle of the week, word-of-mouth news just lumbered along. Children were in school; men were at work; and most of the women were fastening their corsets and getting ready to go see what tails or entrails the butcher might be giving away. Only the unemployed, the self-employed, and the very young were available–deliberately available because they’d heard about it, or accidentally available because they happened to be walking at that exact moment in the shore end of Not Doctor Street, a name the post office did not recognize. Town maps registered the street as Mains Avenue, but the only colored doctor in the city had lived and died on that street, and when he moved there in 1896 his patients took to calling the street, which none of them lived in or near, Doctor Street. Later, when other Negroes moved there, and when the postal service became a popular means of transferring messages among them, envelopes from Louisiana, Virginia, Alabama, and Georgia began to arrive addressed to people at house numbers on Doctor Street. The post office workers returned these envelopes or passed them on to the Dead Letter Office. Then in 1918, when colored men were being drafted, a few gave their address at the recruitment office as Doctor Street. In that way, the name acquired a quasi-official status. But not for long. Some of the city legislators, whose concern for appropriate names and the maintenance of the city’s landmarks was the principal part of their political life, saw to it that “Doctor Street” was never used in any official capacity. And since they knew that only Southside residents kept it up, they had notices posted in the stores, barbershops, and restaurants in that part of the city saying that the avenue running northerly and southerly from Shore Road fronting the lake to the junction of routes 6 and 2 leading to Pennsylvania, and also running parallel to and between Rutherford Avenue and Broadway, had always been and would always be known as Mains Avenue and not Doctor Street.”

“When the dead doctor’s daughter saw Mr. Smith emerge as promptly as he had promised from behind the cupola, his wide blue silk wings curved forward around his chest, she dropped her covered peck basket, spilling red velvet rose petals. The wind blew them about, up, down, and into small mounds of snow. Her half-grown daughters scrambled about trying to catch them, while their mother moaned and held the underside of her stomach. The rose-petal scramble got a lot of attention, but the pregnant lady’s moans did not. Everyone knew the girls had spent hour after hour tracing, cutting, and stitching the costly velvet, and that Gerhardt’s Department Store would be quick to reject any that were soiled.

“It was nice and gay there for a while. The men joined in trying to collect the scraps before the snow soaked through them–snatching them from a gust of wind or plucking them delicately from the snow. And the very young children couldn’t make up their minds whether to watch the man circled in blue on the roof or the bits of red flashing around on the ground. Their dilemma was solved when a woman suddenly burst into song. The singer, standing at the back of the crowd, was as poorly dressed as the doctor’s daughter was well dressed. The latter had on a neat gray coat with the traditional pregnant-woman bow at her navel, a black cloche, and a pair of four-button ladies’ galoshes. The singing woman wore a knitted navy cap pulled far down over her forehead. She had wrapped herself up in an old quilt instead of a winter coat. Her head cocked to one side, her eyes fixed on Mr. Robert Smith, she sang in a powerful contralto:

“A few of the half a hundred or so people gathered there nudged each other and sniggered. Others listened as though it were the helpful and defining piano music in a silent movie. They stood this way for some time, none of them crying out to Mr. Smith, all of them preoccupied with one or the other of the minor events about them, until the hospital people came.

“They had been watching from the windows–at first with mild curiosity, then, as the crowd seemed to swell to the very walls of the hospital, they watched with apprehension. They wondered if one of those things that racial-uplift groups were always organizing was taking place. But when they saw neither placards nor speakers, they ventured outside into the cold: white-coated surgeons, dark-jacketed business and personnel clerks, and three nurses in starched jumpers.

“The sight of Mr. Smith and his wide blue wings transfixed them for a few seconds, as did the woman’s singing and the roses strewn about. Some of them thought briefly that this was probably some form of worship. Philadelphia, where Father Divine reigned, wasn’t all that far away. Perhaps the young girls holding baskets of flowers were two of his virgins. But the laughter of a gold-toothed man brought them back to their senses. They stopped daydreaming and swiftly got down to business, giving orders. Their shouts and bustling caused great confusion where before there had been only a few men and some girls playing with pieces of velvet and a woman singing.”