Skip to content
Book of the Month: The Wide Sargasso Sea (1966) by Jean Rhys

“By night, I attended classes at University College Cork where, as part of an English-literature module, I first read Jean Rhys’s beautiful and subversive Wide Sargasso Sea. Here were words engaged in a different sort of taking apart. ‘Rhys took one of the works of genius of the 19th century and turned it inside-out to create one of the works of genius of the 20th century,’ Michele Roberts has said of Wide Sargasso Sea. The novel didn’t just take inspiration from Charlotte Brontë’s Jane Eyre, it illuminated and confronted it, challenged the narrative. The shorthand I practiced by day was a sort of code, comprehensible only to those initiated in its strange and lovely marks. Speed was imperative, measured in words per minute, and the movement from sound to symbol was not to be slowed by any pondering of meaning. In the world for which we were being trained, our usefulness lay not in any thoughts we might construct ourselves, but in the speed and accuracy with which we recorded the thoughts of others. And here was Rhys, in exquisite, deadly prose, constructing for Antoinette—or Mrs. Rochester—not just thoughts, but a novel in which to voice them.”.”

“They say when trouble comes close ranks, and so the white people did. But we were not in their ranks. The Jamaican ladies had never approved of my mother, ‘because she pretty like pretty self’ Christophine said. She was my father’s second wife, far too young for him they thought, and worse still, a Martinique girl.When I asked her why so few people came to see us, she told me that the road from Spanish Town to Coulibri Estate where was lived was very bad, and that road repairing was now a thing of the past. (My father, visitors, horses, feeling safe in bed – all belonged to the past.) Another day I heard her talking to Mr. Luttrell, our neighbor and her only friend. ‘Of course they have their own misfortunes. Still waiting for this compensation the English promised when the Emancipation Act was passed. Some will wait for a long time.’ How could she know that Mr. Luttrell would be the first who grew tired of waiting?

“One calm evening he shot his dog, swam out to sea, and was gone for always. No agent came fromEngland to look after his property –Nelson’s Rest it was called – and strangers from Spanish Town rode up to gossip and discuss the tragedy. ‘Live at Nelson’s Rest? Not for love or money. An unlucky place.’ Mr. Luttrell’s house was left empty, shutters banging in the wind. Soon the black people said it was haunted, they wouldn’t go near it. And no one came near us. I got used to a solitary life, but my mother still planned and hoped – perhaps she had to hope every time she passed a looking glass. She still rode about every morning not caring that the black people stood about in groups to jeer at her, especially after her riding clothes grew shabby (they notice clothes, they know about money). Then one day, very early, I saw her horse lying down under the frangipani tree. I went up to him but he was not sick, he was dead and his eyes were black with flies. I ran away and did not speak of it for I thought if I told no one it might not be true. But later that day, Godfrey found him, he had been poisoned. ‘Now we are marooned,’ my mother said, ‘now what will become of us?’ ” 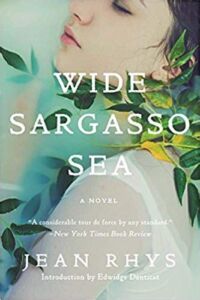 “In this room I wake early and lie shivering, for it is very cold. At last Grace Poole, the woman who looks after me, lights a fire with paper and sticks a lump of coal. She kneels to blow it with bellows. The paper shrivels, the stick4 crackle and spit, the coal smoulders and glowers. In the end flames shoot up and they are beautiful. I get out of bed and go close to watch them and to wonder why I have been brought here. For what reason? There must be a reason. What is it that I must do? When I first came I thought it would be for a day, two days, a week perhaps. I thought that when I saw him and spoke to him I would be wise as serpents, harmless as doves. ‘I give you all I have freely,’ I would say, ‘and I will not trouble you again if you will let me go.’ But he never came.

“There is a window high up – you cannot see out of it. My bed had doors but they have been taken away. There is no much else in the room. Her bed, a black press, the table in the middle and two black chairs carved with fruit and flowers. They have high backs and no arms. The dressing-room is small, the room next to this one is hung with tapestry. Looking at the tapestry one day I recognized my mother dressed in an evening gown but with bare feet. She looked away from me just as she used to do. I wouldn’t tell Grace this. Her name oughtn’t to be Grace. Names matter, like when he wouldn’t call me Antoinette, and I saw Antoinette drifting out of the window with her scents, her pretty clothes and her looking glass. There is no looking-glass here and I don’t know what I am like now. I remember watching myself brush my hair and how my eyes looked back at me. The girl I saw was myself and not quite myself. Long ago when I was a child and very lonely I tried to kiss her. But the glass was between us – hard, cold and misted over with my breath. Now they have taken everything away. What am I doing in this place and who am I? The door of the tapestry room is kept locked. It leads, I know, into a passage. That is where Grace stands and talks to another woman whom I have never seen. Her name is Leah. I listen but I cannot understand what they say. So there is still the sound of whispering that I have heard all my life, but these are different voices.”