Skip to content
Book of the Month: There There by Tommy Orange (2018) 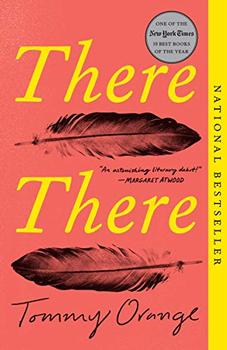 “The title of Tommy Orange’s bold debut novel is a reference to Gertrude Stein’s line about the city of her childhood, Oakland, California: “there is no there there”, she wrote. Oakland happens also to be Orange’s home town and provides the setting for the book, which has attracted many admiring reviews in the US.

The novel centres on the interconnected lives of a group of Native Americans – or Indians, as they call themselves, determined to reclaim a term more often used disparagingly. Orange, himself a member of the Cheyenne and Arapaho tribes of Oklahoma, deals not just with several centuries of oppression of the Native American community (which a brief, dryly witty prologue deals with in a devastatingly matter-of-fact way), but how rites and tradition can seem comically anachronistic in a world of “glass, metal, rubber, and wires, the speed, the hurtling masses” in which “the city took us in”. The book steers clear of the antique romance of the open plains; for that, as Orange wryly notes: “we have… Kevin Costner saving us, John Wayne slaying us [and] an Italian guy named Iron Eyes Cody playing our parts in movies”.

Instead, we encounter contemporary Indian life in all its messy and relatable complexity. The first character we meet, Tony Loneman, is the darkest, a 21-year-old drifter affected by foetal alcohol syndrome. It is his determination to rob the Big Oakland Powwow that gives the book its central narrative, and builds to a violent and unsettling ending that reflects the way in which the exchange of bullets has remained part of American life.”

Larman, Alexander, “There There by Tommy Orange review – moving and powerful,” The Guardian, July 15, 2018

We got on a bus on a cold gray morning in late January 1970. Me and Jacquie had matching beat-up old red duffel bags that didn’t hold much, but we didn’t have much. I packed two outfits and tucked my teddy bear, Two Shoes, under my arm. The name Two Shoes came from my sister, because her childhood teddy bear only had one shoe the way they got it. Her bear wasn’t named One Shoe, but maybe I should have considered myself lucky to have a bear with two shoes and not just one. But then bears don’t wear shoes, so maybe I wasn’t lucky either but something else.
Out on the sidewalk, our mom turned to face the house. “Say goodbye to it, girls.”
I’d gotten used to keeping an eye on the front door. I’d seen more than a few eviction notices. And sure enough, one was right there. Our mom always kept them up so she could claim she never saw them, in order to buy time.
Me and Jacquie looked up at the house. It’d been okay, the yellow house. For what it was. The first one we’d been in without either of the dads, so it’d been quiet, and even sweet, like the banana cream pie our mom made the first night we spent there, when the gas worked but the electricity hadn’t been turned on yet, and we ate standing up in the kitchen, in candlelight.
We were still thinking of what to say when our mom yelled “Bus!” and we had to scamper after her, dragging our matching red duffel bags behind us.

There was an Indian head, the head of an Indian, the drawing of the head of a headdressed, long haired, Indian depicted, drawn by an unknown artist in 1939, broadcast until the late 1970s to American TVs everywhere after all the shows ran out. It’s called the Indian Head Test Pattern. If you left the TV on, you’d hear a tone at 440 hertz—the tone used to tune instruments—and you’d see that Indian, surrounded by circles that looked like sights through rifle scopes. There was what looked like a bullseye in the middle of the screen, with numbers like coordinates. The Indian head was just above the bullseye, like all you’d need to do was nod up in agreement to set the sights on the target. This was just a test.

In 1621, colonists invited Massasoit, chief of the Wampanoags, to a feast after a recent land deal. Massasoit came with ninety of his men. That meal is why we still eat a meal together in November. Celebrate it as a nation. But that one wasn’t a thanksgiving meal. It was a land deal meal. Two years later there was another, similar meal, meant to symbolize eternal friendship. Two hundred Indians dropped dead that night from supposed unknown poison.