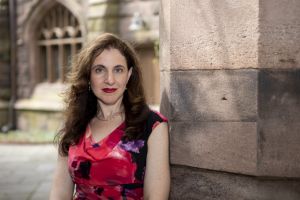 Denise Valenti is a staff writer in the Princeton University Office of Communications. She has a background in journalism, with bylines in the New York Times and the Washington Post, and is currently working on her first novel, a historical fiction read that takes place in Cuba. Here, she speaks to Princeton Writes about sporting multiple authorial hats and offers a preview of her novel. For additional information, see: https://denisevalenti.com/.

What draws you to writing?

Who is your audience?

The only audience I’ve never written for is children. Mostly, I write for my contemporaries and other people who are sort of seekers, curious minds.

What is your writing process?

I aspire to be one of those people who can sit there at a regular time! If many of us are honest with ourselves, I think that’s where many of us are. Not that I necessarily have to write when inspiration strikes, because obviously, as a journalist, you don’t have a choice. When I first started out in newspapers, I was writing three, four stories a day, and those were all expected on deadline and you had to just get them done. That’s actually been really instructive for me [because] I know I can sit down and do it. So I think if you force yourself into that kind of practice, it’s actually very useful. You don’t always have to wait for inspiration.

That being said, I like to have longer stretches. I have a really hard time starting and stopping things, so I don’t like to write for less than an hour at a time, for instance. To me, that doesn’t feel productive.

What is it about the world you want to capture through writing?

Most of what I’ve done in the past is journalism, so that’s my first love, journalism and newspapers in particular. But obviously, we live in a very different media landscape now, and so that’s evolved for me. But really, the thing that I love most is just being able to share good information with people, and helping people get good information that’s going to improve their lives in some way or another. That used to be strictly non-fiction; I’m exploring that now through more creative avenues, through essay-writing, through sharing some of my own experiences now that I’m a little bit older, and also through fiction… I write historical fiction, 20th century. I think that sometimes by looking back at the past, we can take away lessons to apply to the future. So I think that having that step of removal, that space, to examine it from a different angle sometimes helps our perspective, [to] see the things that we’re not seeing.

[At Princeton] It’s an honor to tell the stories of this place from student and faculty awards to critical research to innovative teaching. I’d say one of the most memorable stories I’ve written was about history Professor Kevin Kruse’s research into the life of John Doar ’44, an alumnus who played a key role in the civil rights movement as an attorney for the U.S. Department of Justice’s Civil Rights Division. The article primarily was about one of Professor Kruse’s noteworthy forays into our country’s recent — and perhaps least-understood — history. At the same time, it highlighted the achievements of a Princeton alumnus whose moral courage shaped multiple key events in the civil rights struggle of the 1960s.

Who are your favorite writers?

I feel like I have something to learn from everything! Even if it’s not a genre that I’m working in, or a style of writing that I prefer, I’m always absorbing from other people’s use of language. That being said, one of my favorite writers is Toni Morrison. Just the way she puts words together, sounds together — to me, everything she does is just the complete package of everything that I hope to achieve in my own writing.

The ship was exactly as he had remembered. Its black hull long and lean, masts fore and aft festooned in flags, white decks topped by funnels striped handsomely in red and black. The MS St. Louis was not nearly as sleek nor as commanding as the mighty ocean liners that cut the grey surface of the Elbe River when Max was a boy, but she was dignified, some might even say elegant.

How strange it was to see her here, crisp and bright against Havana’s impossibly azure skies. Though there was no dignity in her current circumstance anchored far from the docks at the center of the harbor. She was a fine ship cruelly condemned, her status reduced to little more than a floating prison, her passengers and crew held captive without recourse.

Gawkers circled the shoreline like spectators at a coliseum. Max stood back from the crowd, though he could not avoid the muddle of conversations, words lobbing at him as he edged outside the throng, and two, in particular, landing like stones.

For days those words screamed at him in large type from the front page of every newspaper he passed on the streets. For the first time since he was six and Fritz Mueller sent him to fetch The Times of London from a newsstand along the Hoheluftchausee, he hadn’t bought a single paper all week. Fritz Mueller. It was a name he had long forgotten, but one that now surfaced among his thoughts, bobbing and listing at the top, much like the ship before him.

The St. Louis swayed in the open water surrounded by constellations of smaller craft. Police vessels weaved between them, the rowboats and makeshift rafts crowded with men who shouted fruitlessly to those on board. Passengers leaned toward the boats, hanging over decks and waving from portholes, stretching arms as far as their perches would allow, though no matter the reach, all that came within grasp was the salt spray thrown from the waves that lapped at the ship.

What would father have said of this unthinkable shame? The man who wore a morning suit at every launch and knew the names and vitals of all the ships that passed through Hamburg’s harbor, every cutter and dinghy, every liner and freighter, even those under foreign flag.

Would he travel on a common passenger ship?

Max wrested the idea from his head. Father had made his choices as he had made his own. Their paths had long since diverged, never to cross again. The only thing that mattered now was Mercy, who awaited Max at her aunt’s apartment in Vedado. Soon they would be swooning on the dance floor of the Hotel Nacional, her hair shimmering gold under the house lights. It was a far pleasanter thought and one aimed in the direction of his future, rather than his past. If he began walking straight away, he could save the bus fare and arrive within the hour.

Taking one last glance at the boat, Max pulled down the brim of his Panama, grateful to remove himself from the spectacle, the embarrassment of seeing a German ship quarantined as if diseased.

The sun fell quickly now, though the air was as hot and thick as it had been at midday. He could have walked west along the Malecon, a shorter and more direct route, but instead he hurried toward the narrow, cobblestone streets set deep in shadow before him.

It was easy to lose oneself here. The passages through old Havana were almost indiscernible. Antiquated buildings stood so close they left no impression of the sky above, their murky stone cooling the air like the damp walls of a cave. The smell of must and urine rose from the cobbles, punctured every few paces by the sour scent of boiled cassava pouring through an open window. There was an alley Max remembered, alongside a shop painted a garish blue. He turned down the narrow path, the buildings so close he could nearly touch them if he spread his arms. A friend from the factory brought him to this alley on a late-night stroll many months before, and he remembered it for the ornate wooden doorways at the front of each building, one of which he hoped would be open.

It was early, but Max pushed at a gate and found it ajar along with the door behind it. He stepped through into an unlit room occupied by a few men seated at a round table. Their conversation ceased as he entered, and only resumed—though this time at a whisper—as he approached the bar. He ordered a rum and the bartender made a lean pour into a clouded glass, which he threw back quickly. He asked for another, whipping back his neck to take the shot clean, then set a few pesos on the counter without another word. Although it was daytime, he knew it was best to complete his transaction swiftly and without any ado.

Emerging from the burrow-like streets and enlivened by the rum, he picked up his pace and again registered the lingering heat of the day. Sometimes it seemed the sun itself took hold in the concrete sidewalks and laid wait in the grass along the promenades. His cheeks burned—from the liquor or the weather he could not tell—and a trickle of sweat streamed from his hairline. He lifted the brim of his hat to wipe his forehead, then dabbed the back of his neck, realizing too late that his handkerchief, now damp and stained, no longer was suitable for service should Mercy require it.