This place — it is redolent with the breath of the emotional life lived here and the intellectual life made manifest here. “The wisdom of the dead and the energy of the living” merge to become a tradition that informs the present and shapes the future.

On Friday, November 22, at 2 p.m., we kicked off the University’s first tour of its literary history on the steps of Nassau Hall with the words of Toni Morrison, in the exact spot where Morrison first read her 1996 essay about Princeton, written to mark its 250th anniversary. Morrison’s incredible writing does indeed interweave past and present, and it encourages us to explore the history of our school, to delve into the public and private memory that makes Princeton so extraordinary. That’s just what Princeton Writes did on a chilly, semi-rainy fall afternoon on campus. 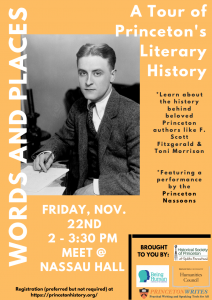 Working alongside the Historical Society of Princeton and Princeton’s Humanities Council, we organized a literary history tour as part of Being Human 2019, the international festival of humanities. You may be wondering, what exactly is a literary history tour? Both the words “literary” and “history” have a vast sweep, but we narrowed them to the many authors who were inspired by Princeton and either wrote about the University, spent time on its campus, or taught here. One of the most rewarding aspects of creating the tour was seeing the intersection of Princeton’s literary history with many other histories, such as how, in F. Scott Fitzgerald’s This Side of Paradise, the protagonist gets on the Dinky, which used to stop right by Blair Arch, or how Eugene O’Neill lived in University Hall, which was demolished in 1910 to make room for what is now Holder Hall. From transportation to architecture, Princeton’s literary history is intertwined with the many histories that make up the memory of the University. 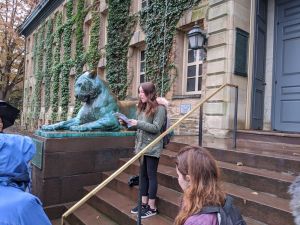 Approximately 30 people joined us on our tour, which proceeded from Nassau Hall to Holder Hall, where we talked about John McPhee, a pioneer of creative nonfiction and a well-loved Princeton professor. Some of McPhee’s writing is about Princeton students, and we read an excerpt from one of his profiles on Thomas Pearsall Field Hoving, who arrived at Princeton as an undergraduate in 1949. From the first sentence, you will surely get a feel for McPhee’s writing: 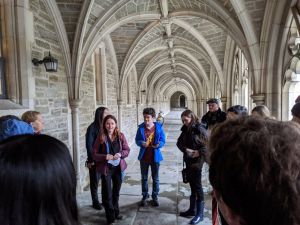 “On Friday, January 12, 1951, Hoving and his Princeton roommates decided that the time had come to pull themselves together, that their general and flagrant neglect of the university curriculum was approaching a critical intensity, and that the weekend then beginning should be spent in solid intellectual endeavor by all, since the term’s final examinations would begin on Monday.”

We also briefly discussed Eugene O’Neill. Legend has it, he was expelled for throwing a beer bottle through the window of Prospect House, the residence of Woodrow Wilson, future president of the United States. The true story is not as interesting — O’Neill simply didn’t return for sophomore year.

Our next stop was Blair Arch, where we talked about F. Scott Fitzgerald’s This Side of Paradise and his time at Princeton. The classic “poor man pursuing the wealthy girl” plot is said to be inspired by Fitzgerald’s weekends at Cottage Club, and he began writing This Side of Paradise in an upstairs room in Cannon Club. Moving along to Prospect Gardens, we explained William Faulkner’s tie to Princeton: His editor lived in town, and so Faulkner did extensive work on three of his novels here. We then read a 1953 New Yorker article that observes Faulkner and his editor at work in Princeton. 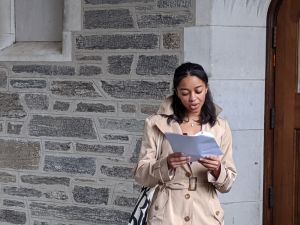 Walking past Frist Campus Center, we made our way to McCosh Hall, where we gave a brief history of Princeton’s Program in Creative Writing. The program is quite renowned, with a plethora of famous writers and professors, so we went through a lot of names very quickly, including Allen Tate, George Stewart, Philip Roth, John Berryman, Edmund Keeley, Theodore Weiss, Joyce Carol Oates, Russell Banks, Paul Muldoon, Tracy K. Smith, Jhumpa Lahiri, and Carlos Fuentes, among others.

At 1879 Arch, we had a surprise in store for our tour guests. After explaining how “East of the Sun (and West of the Moon)” was written at Princeton by a 21-year-old undergraduate, Brooks Bowman, the Princeton Nassoons joined us to sing the jazz classic. After all, Princeton’s literary history includes not only novelists, but also songwriters! 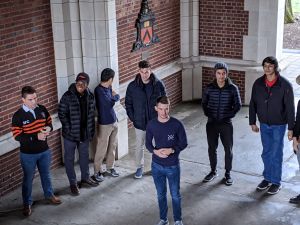 Our final stop was at Firestone Library, where we explained Upton Sinclair’s fascinating connection to Princeton, which involved camping out in a tent to have access, via horse and buggy, to the University’s Civil War collection. We concluded with a more contemporary author, Jennifer Weiner, who was a member of Princeton’s class of 1991. Weiner’s In Her Shoes, which was made into a movie, has a character who hides in Firestone Library’s B Floor when she is kicked out from her father’s and sister’s homes.

We ended the tour back at Nassau Hall, where we had opened with Morrison’s beautiful description of Princeton’s history. By delving into the literature on campus from the past and present, we hope to create a deeper understanding of and appreciation for writing among Princeton students, faculty, staff, and members of the community. Stay tuned for future Princeton Writes events that we have coming up!

Read a story inspired by the tour and written by Danielle Ranucci ’23 here.